[Flora Poste has come to Cold Comfort Farm to visit her cousins.]
The fire was now burning brightly. Flora took up some sewing with which to beguile the time until supper in her own room. She was making a petticoat and decorating it with drawn threadwork…
There entered a man who could only be Seth. Flora looked up with a cool smile. ‘How do you do? Are you Seth? I’m your cousin, Flora Poste. I’m afraid you’re too late for any tea… unless you would like to make some fresh for yourself.’
He came over to her with the lounging grace of a panther, and leaned against the mantelpiece. Flora saw at once that he was not the kind that could be fobbed of with offers of tea. She was for it.
‘What’s that you’re making?’ he asked. Flora knew that he hoped it was a pair of knickers. She composedly shook out the folds of the petticoat and replied that it was an afternoon tea-cloth. 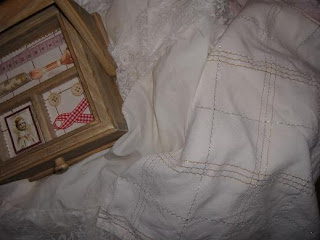 ‘Aye… woman’s nonsense,’ said Seth softly…’Women are all alike – ay fussin’ over their fal-lals and bedazin’ a man’s eyes, when all they really want is man’s blood and his heart out of his body and his soul and his pride.’
‘Really?’ said Flora, looking in her work-box for her scissors.
‘That’s all women want – a man’s life. Then when they’ve got him bound up in their fal-lals and bedazin’ ways and their softness, and he can’t move because of the longin’ for them as cries in his man’s blood – do you know what they do then?’
‘I’m afraid not’ said Flora. ‘Would you mind passing me that reel of cotton on the mantelpiece, just by your ear? Thank you so much.’

observations:
This book was written as a satire or parody of a genre of books current at the time, one that could be described as rural gothic – dramatic tales full of deep emotions and passionate natures: Mary Webb’s Precious Bane, a very good book indeed, is probably the only real survivor.  Stella Gibbons considered these books did not have enough jokes, and were too full of long, not very meaningful sentences. (One of her ideas was to mark with asterisks passages in her own books that she thought particularly fine writing.) But though the targets have long since gone, Cold Comfort Farm will last forever and surely amuse for as long as books are read. ‘Something nasty in the woodshed’ has entered the language, and keen readers have other catchphrases: when the sukebind is in bloom, the water-voles, the hired girl, flying in the face of Nature, clettering the dishes. And if your family ask if you are busy, Cousin Judith’s reply is strongly recommended: ‘Busy! Busy weaving my own shroud belike. Do as you please if so be as you don’t break in on my loneliness.’
In the end Flora efficiently sorts out the whole family one by one.
For American readers: knickers are underwear.
Cold Comfort Farm Flora Mary Webb parody Precious Bane satire Seth sewing Stella Gibbons