What we wear when we talk about marriage: Maugham

Up at The Villa by W Somerset Maugham

“…She had not known at what time his ‘plane would get in, and had been waiting for him since luncheon. She sent the message that she would be glad to see him whenever he cared to come. Her heart had begun to beat a trifle hurriedly.  She took out her looking-glass from her bag and twice looked at herself. She was pale, but she did not put on any rouge, since she knew he did not much like it; she dabbed the powder-puff over her face and painted her lips.  She was wearing a light summer dress, of yellow linen wth a wall-paper design; it looked so simple that you would have thought ahousemaid might have worn it, but it had been made by the best dressmaker in Paris.
Presently she heard the car drive up and a moment or two later Edgar appeared. She got up from her chair and advanced to meet him.  As usual he was dressed perfectly as became his age and station… He warmly clasped her hand. ‘How cool and fresh you look, and as pretty as a picture.’ [Elderly admirer] Mr Atkinson had used that hackneyed phrase every time he saw her. Mary, faintly tickled to hear it from Edgar, supposed it was what gentlemen of a certain age always said to women much younger than themselves…” 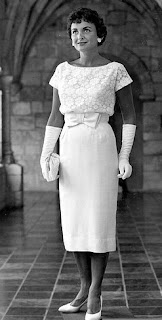 Somerset Maugham’s reputation went into a predictable decline when he died in 1965,  but he deserves a revival. His novels are highly enjoyable, and surprisingly modern in their attitudes – particularly to sex and women. His women characters are often flawed but very real compared to those of his contemporaries: John Galsworthy covers much of the same time, and similar middlebrow territory, but his women characters are dead on the page compared with Maugham’s. Even Maugham, though, can't resist that favourite male author trope of the dress that looks simple but is not. Has anyone ever actually seen any such dress?
Up at the Villa is what’s known a ‘slight tale’, but enjoyable nonetheless. Mary, the heroine above, has been offered a safe marriage by Edgar: he is a respectable man who will look after her, and she will have an apparently ideal life. (There may be a clue in the title: there is a Robert Browning poem called 'Up at a Villa, down in the City', contrasting the boredom of life in the country with the joy and excitement of the town.) Mary has had quite an adventure since she last saw him, and now she is about to tell him about it. What will he say? Women revealing things on the edge of marriage: let’s just say she’s going to end up better off than Tess of the d’Urbevilles. A lot better.
The picture is a fashion shot from the State Library and Archives of Florida, and is featured on Flickr.