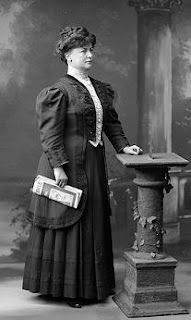 "...On the Sunday afternoon Mrs. Baines was trying to repose a little in the drawing-room, where she had caused a fire to be lighted. Constance was in the adjacent bedroom with her father. Sophia lay between blankets in the room overhead with a feverish cold. This cold and her new dress were Mrs. Baines's sole consolation at the moment. She had prophesied a cold for Sophia, refuser of castor-oil, and it had come. Sophia had received, for standing in her nightdress at a draughty window of a May morning, what Mrs. Baines called 'nature's slap in the face.' As for the dress, she had worshipped God in it, and prayed for Sophia in it, before dinner; and its four double rows of gimp on the skirt had been accounted a great success. With her lace-bordered mantle and her low, stringed bonnet she had assuredly given a unique lustre to the congregation at chapel. She was stout; but the fashions, prescribing vague outlines, broad downward slopes, and vast amplitudes, were favourable to her shape. It must not be supposed that stout women of a certain age never seek to seduce the eye and trouble the meditations of man by other than moral charms. Mrs. Baines knew that she was comely, natty, imposing, and elegant; and the knowledge gave her real pleasure. She would look over her shoulder in the glass as anxious as a girl: make no mistake..."

In general, it is female writers who describe clothes in books, and so the blog is heavy on them. But Arnold Bennett (not Alan Bennett, but yes the man with the omelette) is an exception: this book is packed full of descriptions of clothes - he could provide a week's worth of entries, and will feature again. Bennett, a middlebrow, prolific writer who lived from 1867 to 1931, has a reputation which goes up and down, and maybe he is coming back into fashion again. He certainly sounds like a nice man: his own introduction to this book is fascinating, self-deprecating, and very funny. ‘Old Wives Tale’ is slightly misleading: he aims to tell the story of how Constance and Sophia Baines eventually become old wives, and in fact the most entertaining section is the first, where they are young women. The book is long, and a bit variable, but it is a wonderful attempt to capture the whole of life, and to think about a woman you see in old age, and think that she wasn’t always like that – it is sympathetic and understanding, clever and funny, with sentences of lovely observation. Like Somerset Maugham, on the blog here,  his female characters are alive and real. Mrs Baines, above, the mother of the two girls, is at odds with Sophia about a potential young man: “why should a young girl be permitted any interest in any young man whatsoever? The everlasting purpose had made use of Mrs Baines and cast her off, and, like most persons in a similar situation, she was, unconsciously and quite honestly, at odds with the everlasting purpose.” But young people are no better: later, Sophia looks at an aging woman she is living with: “she had no right to expose herself picturesquely beneath a crimson glow in all the panoply of ribboned garters and lacy seductiveness. It was silly; it was disgraceful. She ought to have known that only youth and slimness have the right to appeal to the feelings by indecent abandonments.”
The photograph is from the National Library of Ireland, and is featured on Flickr.
Arnold Bennett Old Wives Tale W Somerset Maugham