Spoilt? Us?: A Little Princess 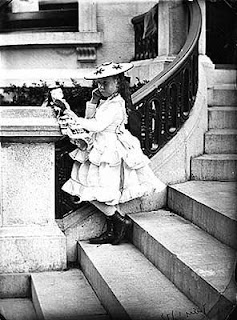 [Sara Crewe is getting ready for school in London: her father is about to return to India]
“…Captain Crewe was a rash, innocent young man, and wanted his little girl to have everything he admired himself, so between them they collected a wardrobe much too grand for a child of seven. There were velvet dresses trimmed with costly furs, and lace and dresses, and embroidered ones, and hats with great, soft, ostrich feathers, and ermine coats and muffs, and boxes of tiny gloves and handkerchiefs and silk stockings in such abundant supplies that the polite young women behind the counters whispered to each other that the odd little girl with the big solemn eyes must be at least some foreign princess - perhaps the little daughter of an Indian rajah.
[Then] they went to a number of toy-shops and looked at a great many dolls before they finally discovered [the right one]…She was a large doll, but not too large to carry about easily… ‘Of course,’ said Sara… ‘of course Papa, this is Emily.’
So Emily was bought and actually taken to a children’s outfitter’s shop, and measured for a wardrobe as grand as Sara’s own. She had lace frocks, too, and velvet and muslin ones and hats and coats and beautiful lace-trimmed underclothes, and gloves and handkerchiefs and furs…”


The Secret Garden is generally touted as Frances Hodgson Burnett’s best children’s book, and it is a fine story, but surely all girls prefer A Little Princess? It doesn’t seem as though FHB could have focus-grouped it, but the book has everything: wonderful clothes and luxury living to begin with, followed by descent into poverty and hard times, followed by a slow journey out of the pit of despond into ultimate happiness. Young girls live along with poor Sara through her difficult times (those diamond mines….). The scene where she is starving, and by magic chance gets some hot fresh buns, but gives them away to a child she considers worse off – this is seared into the minds of happy well-fed children who could imagine it very clearly, but were not convinced they would have been quite so unselfish.

Shirley Temple’s 1939 film version cannot be recommended, even though in general Clothes in Books is a massive fan. Alfonso Cuaron’s 1995 film was surprisingly good. It took liberties with the plot, but that’s to be expected: children’s books are much darker these days of course, but we don’t kill off parents so lightly – as the wonderful children’s writer Antonia Forest points out in The Attic Term. During a discussion of the book, a character asks: ‘when did Father turn up not dead after all, with the rajah’s diamond? ’- today one would confidently expect such an outcome…
The picture is from the National Library of Ireland collection, and is featured on Flickr.