'Your poor old dead legs': The Pursuit of Love

The Pursuit of Love by Nancy Mitford


“...Louisa was married in the spring. Her wedding dress, of tulle frills and sprays of orange blossom, was short to the knee and had a train, as was the hideous fashion then. [Her sister] Jassy got very worked up about it.
‘So unsuitable.’
‘Why, Jassy?’
‘To be buried in, I mean. Women are always buried in their wedding dresses aren’t they? Think of your poor old dead legs sticking out.’
‘Oh Jassy don’t be such a ghoul. I’ll wrap them up in my train.’
‘Not very nice for the undertakers.’
Louisa refused to have bridesmaids. I think she felt that it would be agreeable, for once in her life, to be more looked at than Linda.
‘You can’t think how stupid you’ll look from behind.’ Linda said, ‘without any. Still, have it your own way. I’m sure we don’t want to be guyed up in blue chiffon, I’m only thinking what would be kinder for you.’…
The wedding day was fine and balmy, and, when we went in the morning… we found the light little church bunchy with spring flowers. Later… it looked quite different. I thought that I personally should have liked better to be married in it when it was so empty and flowery and full of the Holy Ghost...

Mrs Wills struck up ‘Here comes the Bride’ with all the stops out, and Louisa, her veil over her face, was being dragged up the aisle at double quick time by Uncle Matthew. At this moment I think Linda would gladly have changed places with Louisa, even at the cost – the heavy cost – of being happy for ever after with John Fort William. In what seemed like no time at all Louisa was being dragged down the aisle again by John, with her veil back, while Mrs Wills nearly broke the windows, so loud and so triumphant was her ‘Wedding March.’..." 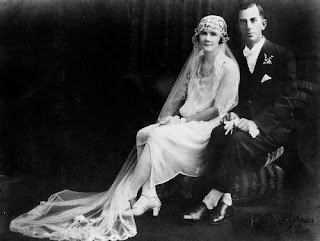 Nancy Mitford is the ideal subject: clothes play an important part in her books – as do weddings, love, sisters, and jealousy. She was not buried in her own wedding dress: she was cremated.  She had married, perhaps, the wrong person on the rebound from a disastrous failed engagement. The wedding above is one of the successful ones in her books – Louisa seems very happy with her Lord Fort William, and the marriage produces the splendid Northey. Narrator Fanny also has a happy marriage.
The picture was taken at the wedding of Nancy and Clarrie Wieting in Brisbane Australia in 1925, and is part of the collection of the State Library of Queensland. It is featured on Flickr.
Fanny Linda Louisa Nancy Mitford Northey Pursuit of Love weddings