New ideas in hat-trimming: What Katy did at School

What Katy Did At School by Susan Coolidge

“… ‘I don’t understand about the bath-house’ said Katy.
“On Saturday it is reserved for us… [replied Rose] We go across the green, and down by Professor Sercomb’s, and we are in plain sight from the college all the way; and of course those abominable boys sit there with spy-glasses and stare as hard as ever they can.  It’s perfectly horrid. [Having to carry] ‘A bath towel, a sponge and soap’, indeed! I wish I could make Miss Jane eat the pieces of soap which she has forced me to carry across this village… And bath towels afterwards by way of a dessert… Never mind! Just wait! A bright idea strikes me.’…
The bathing party consisted of eight girls, with Miss Jane for escort. They were half way across the common before Miss Jane noticed that everybody was shaking with stifled laughter, except Rose, who walked along demurely, apparently unconscious that there was anything to laugh at. Miss Jane looked sharply from one to another for a moment, then stopped short and exclaimed ‘Rosamund Redding! How dare you?’
‘What is it Ma’am?’ asked Rose, with the face of a lamb.
‘Your bath towel! Your sponge!’ gasped Miss Jane.
‘Yes, ma’am, I have them all,’ replied the audacious Rose, putting her hand to her hat. There, to be sure, was the long towel, hanging down behind like a veil, while the sponge was fastened on one side like a great cockade; and in front appeared a cake of pink soap, neatly pinned into the middle of a black velvet bow...” 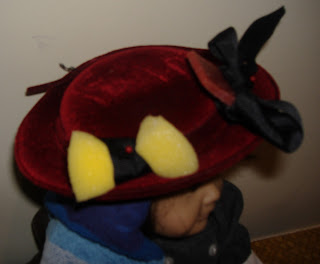 
The girls attend a boarding-school positioned next to a college for boys -  a topic which, quite surprisingly, features a lot in the book. Boys and girls are very flirtatious and although the author clearly disapproves – forcing the girls to start a Society for the Suppression of Unladylike Conduct – there is no notion that these girls are innocent or unaware. The details of their washing arrangements are in general illuminating – Katy and her father insist on a washstand in her study-bedroom, though up till that point no-one has such a thing. And the boys staring at the girls with their towels is an image to resonate down the ages: you can't blame Rose Red for being furious.
What Katy Did and What Katy Did at School were very popular in England during most of the 20th century, despite many of the details of Katy’s life and setting being fairly incomprehensible to a modern girl. Still popular now? Who knows. There is a Philip Larkin poem called ‘Forget What Did’ – I have always wondered if this is connected in any way with Dorry’s diary in the first book, in which it is a repeated phrase, spelt ‘Forgit what did.’ Dorry and Johnnie are intriguingly role-reversed to modern eyes: ‘Dorry seemed like a girl who had got into boy’s clothes by mistake, and Johnnie like like a boy who, in a fit of fun, had borrowed his sister’s frock.’
hat Philip Larkin Susan Coolidge What Katy Did What Katy Did At School