“At first he did not identify Maud Bailey, and he himself was not any way remarkable, so that they were almost the last pair at the wicket gate. She would be hard to miss, if not to recognise. She was tall, tall enough to meet Fergus Wolff’s eyes on the level, much taller than Roland. She was dressed with unusual coherence for an academic, Roland thought, rejecting several other ways of describing her green and white length, a long pine-green tunic over a pine-green skirt, a white silk shirt inside the tunic and long softly white stockings inside long shining green shoes. Through the stockings veiled flesh diffused a pink gold, almost. He could not see her hair, which was wound tightly into a turban of peacock-feathered painted silk, low on her brow. Her brows and lashes were blond; he observed so much. She had a clean, milky skin, unpainted lips, clearcut features, largely composed. She did not smile. She acknowledged him and tried to take his bag, which he refused to allow. She drove an immaculately glossy green Beetle… Her voice was deliberately blurred patrician; a kind of flattened Sloane. She smelled of something ferny and sharp. Roland didn’t like her voice…” 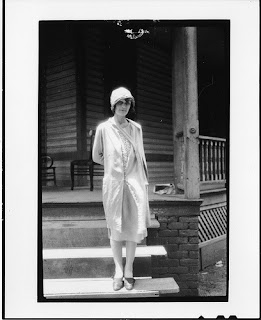 
This is the first meeting of the two academics at the centre of the modern part of the novel. It takes place in 1986, but really it is hard to imagine this outfit at any period; a vaguely 20s setting is the best we can do. There is a hint that Roland’s mind boggles, is the reader’s meant to as well? It’s an awkward description: the green and white length, ‘brow’ and ‘brows’ within three words, and in UK English it should be ‘blonde’. Her being taller than Roland is a welcome surprise.
Another character in the book has her clothes described several times:  For her ‘menial’ job she wears a black suit over a pink silk shirt with high heels and a black beret. Later ‘[he saw her legs] in powder-blue stockings and saxe blue shoes, under the limp hem of a crepey mustard-coloured dress, printed with blue moony flowers.’ When life starts to get better (mainly by ditching Roland) she is ‘shining in a putty-coloured glossy suit over a plum-coloured shirt’. Strangely specific yet still hard to imagine. But it’s a rollicking yarn if you ignore the fake poetry and long Victorian letters, and just read the bits in between. And then there’s the pinning down of another female academic – her life, work and strange appearance are carefully described early in the book. The next time she turns up she is neatly summarized thus: ‘…Beatrice like an incoherent bale of knitting wool...’

The final scene of the book is beautifully done, perfectly judged. It is discussed in detail by John Sutherland in his first book of 'curiosities and conundrums', Where was Rebecca Shot?

The photograph was taken during the Scopes ‘monkey’ trial in Dayton Tennessee in 1925. It shows Ova Corvin Rappleyea, who was the wife of George Rapppleyea, one of the architects of the court case. The photograph is in the Smithsonian Institute Archives, and is featured on Flickr.