Vamping the suspect: a suitable outfit

"...Miss Harriet Vane went out on a shopping expedition. This was her second venture of the kind since her arrival in Wilvercombe, and on both occasions her purchases were dictated by the desire of pleasing a man. On this occasion she wanted an afternoon frock. And why? She was going out for a picnic.
She had picnicked before, with Lord Peter; and for him the old tweed skirt and well-worn jumper had been good enough. But today these garments would not do…
She now selected a slinky garment, composed of what male writers call ‘some soft, clinging material’, with a corsage which outlined the figure and a skirt which waved tempestuously about her ankles. She enhanced its appeal with an oversized hat of which one side obscured her face and tickled her shoulder, while the other was turned back to reveal a bunch of black ringlets, skilfully curled into position by the head hairdresser at the [Hotel] Resplendent. High-heeled beige shoes and sheer silk stockings, with embroidered gloves and a hand-bag, completed this alluring toilette, so eminently unsuitable for picknicking. In addition, she made up her face with just so much artful restraint as to suggest enormous experience aping an impossible innocence, and, thus embellished, presently took her place beside Henry in the driving-seat of [his mother’s] large saloon..." 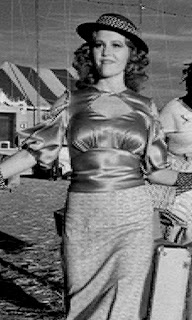 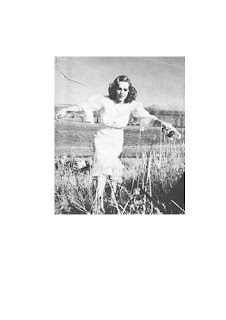 observations:
Harriet Vane is a detective story writer and part-time sleuth, beloved of Lord Peter Wimsey. She is setting out to vamp a suspect.
A corsage today usually means an arrangement of flowers attached to an outfit, or wrist, as decoration; but when the book was written, and earlier, was a common term for a woman’s bodice or jacket.
The pictures are of Madeleine Kahn playing Miss Trixie Delight in the film Paper Moon, made in 1973 and set in the 1930s. She is setting out to vamp Ryan O'Neil's character, Moses Pray, and then to try to get the child Addie on her side. In the book Addie Pray by Joe David Brown (1971), this is how she is described (by Addie, the narrator):
"Trixie  had a good figure, a little on the heavy side, but I don't guess most people looked past her bosom... She liked to wear tight sweaters... You could see that her nose was a little too thin and pointed and her eyes were too close together... But when Trixie walked in somewhere, women would nudge each other and men would pop their eyes and sit up straight." Trixie is no match for Addie, who soon separates her from Moses (Long Boy in the book). The old fool.
Addie Pray disguise Dorothy L Sayers Harriet Vane Have His Carcase Lord Peter Wimsey makeover Paper Moon